The Distinction Between Compromising and Collaborating

07 Jan The Distinction Between Compromising and Collaborating

Posted at 07:24h in Uncategorized by rkilmann

People often ask me to clarify compromising and collaborating, especially since these two modes involve both people getting their needs met. In particular, people often use the word “compromise” to indicate that they have successfully resolved the matter at hand. The key distinction concerns whose needs get met (and to what extent) as a result of using a particular conflict mode. By definition, compromising is each person getting PARTIALLY satisfied, but not completely satisfied. I think of compromising as a 50/50 split, in which each person gets a reasonable share of the available pie. But a compromise could also be a 75/25 split, where one person gets more than the other, but both people still get less than all their needs met. But notice that a 50/50 or a 75/25 split still adds to 100: a zero-sum game along the distributive dimension — the more one gets, the less the other gets.

As defined by the TKI Conflict Model, collaborating means that both persons get ALL their needs met along the integrative dimension. How is this possible? 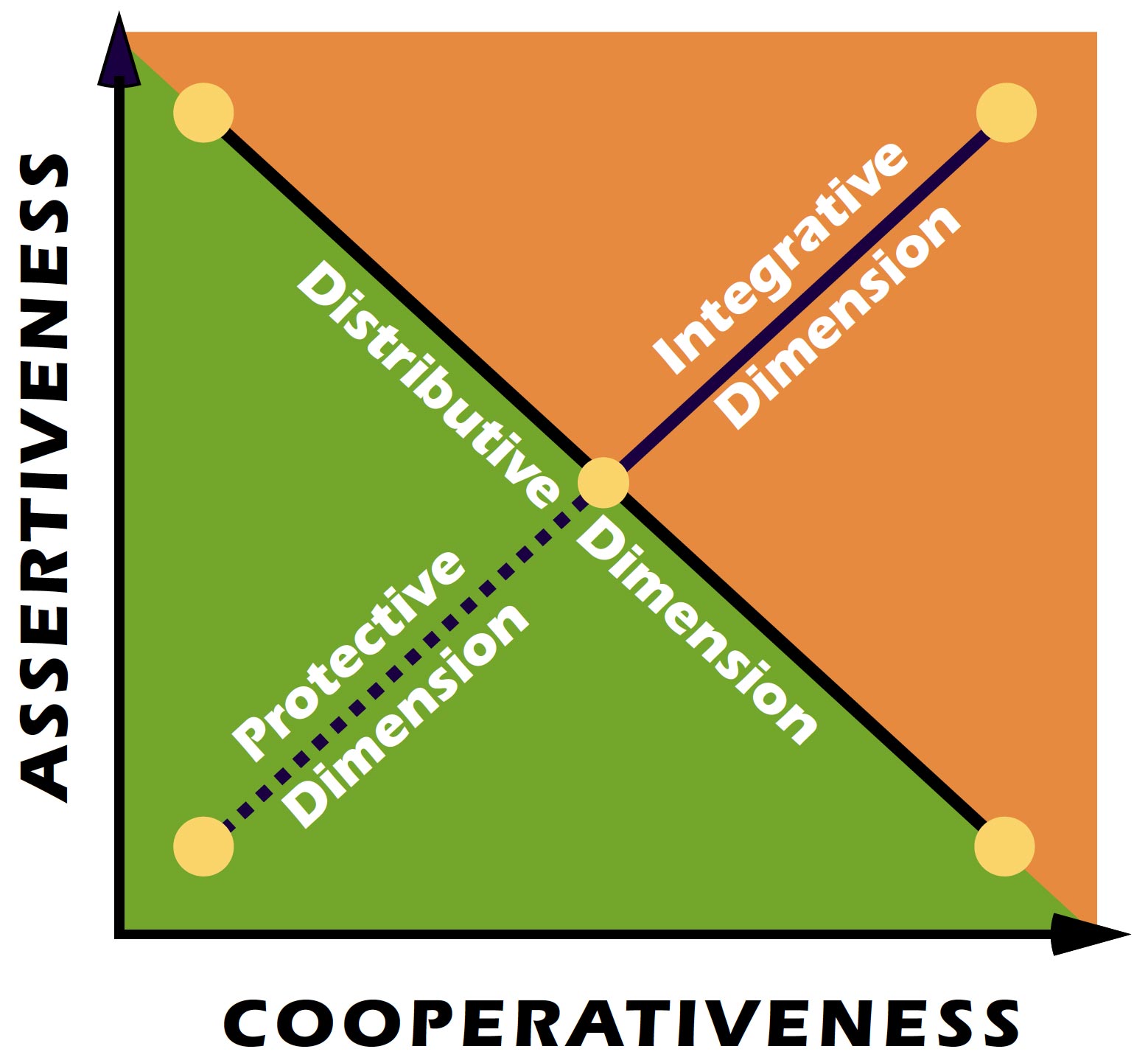 By using the collaborating mode under the right conditions (such as making the conflict more complex in order to expand the size of the pie available to both persons, maintaining trust among participants, speaking and listening with sensitivity and empathy, and so forth), it’s possible to achieve total need satisfaction for both. With SYNERGY (coming up with a creative solution that uniquely satisfies everyone’s needs), we thus achieve a 100/100 resolution instead of a 50/50 split.

Here is a simple example to make the point: Let’s say that two managers are discussing when to get together for a work meeting. Bob wants to meet at 9:00 in the morning (because he’s most alert at that time), while Eduardo wants to meet at 4:00 in the afternoon (for the same reason). By compromising, they might split the difference and meet at noon. This solution, while workable, does not satisfy either person very well.

Using the same example, let’s consider how the collaborating mode results in a very different outcome: Eduardo tells Bob that it’s most important for them to clarify the strategic goals of their business unit — a topic that Bob has put aside, with one excuse or another, for quite some time. Eduardo also suggests that they meet at his home in the late afternoon, since he would love to arrange a festive Mexican dinner as part of their meeting. Since Bob loves Mexican food and is eager to meet away from the stresses of the workplace, he’s happy to have the meeting at 4:00PM at Eduardo’s place. In addition, Bob knows that the topic of the meeting is something that must be addressed sooner or latter; by discussing it outside of the work environment, they might be able to develop a creative solution to their long-standing strategic conflict.

As a result of each person sharing more about his needs and wants (which makes the initial conflict more complex), the size of the pie has been greatly expanded, which opens the door to a creative solution. The meeting indeed takes place at 4:00PM as Eduardo initially preferred, but the timing of the meeting is now the least important aspect! Indeed, the late afternoon meeting at Eduardo’s allows both of them to relax, continue their discussion on a difficult subject over dinner, and thus gives them the time and space to resolve their other differences. Collaborating is thus quite different from a quick, middle-ground attempt at giving each person only something of what they really want. Perhaps Eduardo and Bob will also use collaborating to resolve their differences about strategic goals — by first expanding the size of the pie and then maintaining the right conditions for a synergistic solution.