Posted at 13:56h in Articles by kilmann

On the occasion of the 40th Year Anniversary of the TKI assessment, I’d first like to highlight some of the key features of the TKI that enable people to improve how they resolve their interpersonal conflicts (whether at home or at work). Then I’d like to encourage people to apply their improved conflict management skills to transform their surrounding systems (including cultural norms, strategies, structures, reward systems, and work processes) that tend to dominate organized action. In fact, by successfully addressing the “systems/person paradox” (80% of what takes place in an organization is determined by its systems, while only 20% is actually driven by people’s own preferences and skills), systemwide conflict management can successfully empower members to self-design and self-manage most of what influences their organizational behavior, satisfaction, and results. 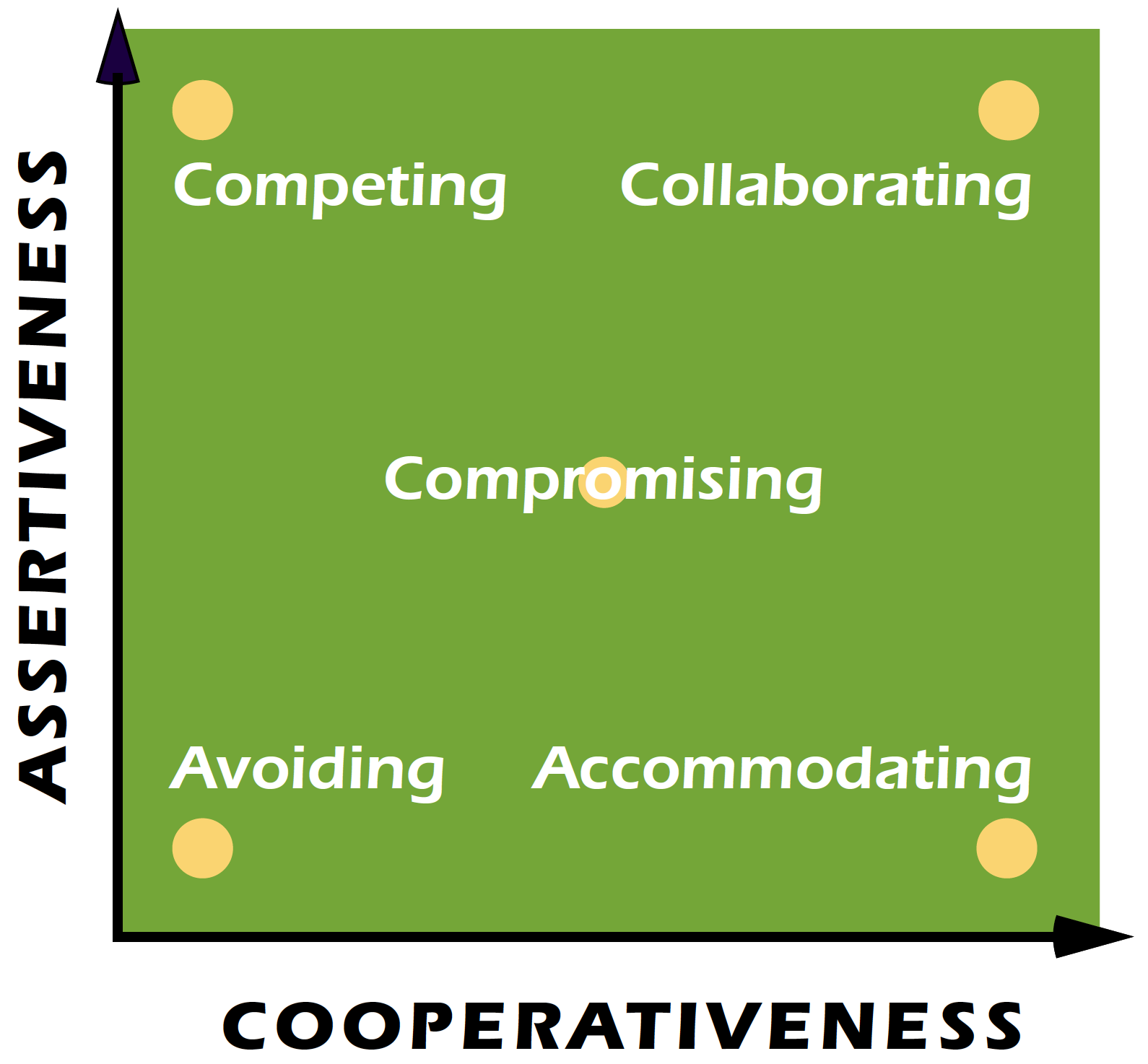 The first version of this conflict management model was presented in Blake and Mouton’s 1964 book, The Managerial Grid. The authors plotted five behavioral modes on two dimensions: concern for production and concern for people. From the mid to late-1960’s, Blake and Mouton, Lawrence and Lorsch, and Jay Hall each developed a self-report instrument to assess the five conflict modes.

But a big red flag soon appeared with these early attempts at developing a self-report measure of conflict-handling behavior: Most people reported that they usually collaborate with others and rarely avoid conflict. Yet this consistent finding did not jive with how respondents’ conflict behavior was experienced by their peers, bosses, and subordinates!

Dr. Ken Thomas and I surmised that a significant “response bias” had inadvertently been introduced into the measurement process: The three self-report instruments from the 1960s were implicitly motivating people to describe their behavior as collaborating, since the test items for the collaborating mode sounded much more “socially desirable” than the test items for the avoiding mode. In fact, these three instruments were really measuring how important it was for a respondent to “look good” to himself and others—rather than assessing the respondent’s actual conflict-handling behavior.

To overcome this “looking good” bias,” Ken and I developed our TKI assessment to make it very difficult for respondents to distort their results: We developed 30 A/B statements, where each A was matched with an equally desirable B (determined by a series of research studies). The respondents to the TKI were asked to choose either the A or B statement on each of the 30 pairs, according to this instruction: “How do you usually respond when you find your wishes differing from those of another person?” However, since each A/B pair had already been matched in social desirability, a person couldn’t pick one statement over the other to look good. Instead, the person had little choice but to pick the A or B depending on which statement more accurately described his actual conflict-handling behavior. The efficacy of our approach to instrument design was subsequently confirmed by our research findings: For those three early assessments, more than 90% of people’s results could be explained solely by the social desirability of the five modes. For the TKI assessment, we were able to reduce this response bias to 17%. Quite a difference!

In 1977, Ken and I published the development and validation the TKI assessment in the prestigious, peer-reviewed journal: Educational and Psychological Measurement. In addition to the social desirability comparisons of the TKI against the three other conflict mode instruments of that era, we also were able to present strong research support for the TKI on all the established validity and reliability criteria for self-report assessments.

Another important feature of the TKI is that it focuses on a person’s behavior, which is far different from attempting to assess a person’s enduring personality traits. Once a person takes the TKI and discovers which conflict modes she might be using too much or too little (as compared to a large normative sample), a person can easily change her conflict-handling behavior—which can readily be confirmed by her taking another TKI assessment just a few days or a few weeks later.

Such short-term changes in conflict behavior would then allow her to get more of her needs as well as other people’s needs met. This high-impact, most-desirable outcome can be achieved (a) by a person reviewing her TKI results, (b) next learning how to enact all five modes with care, sensitivity, and respect, and (c) then matching the right conflict mode to the particular attributes of the situation: the amount of stress, level of trust, amount of time, complexity of the issues, relative importance of the issues to each person, quality of communication and listening skills, whether the cultural norms and the reward system encourage the use of a particular conflict mode, and whether those persons involved in the conflict want their relationship to last.

If there is overwhelming stress in the situation, forget about using the collaborating mode. The same is the case if there’s not enough time to hold a probing discussion or if the two people don’t trust one another. But compromising can be an effective approach in that stressful and time-limited situation, as long as the issue is at least moderately important to the two people and they both want their relationship to last. In the latter case, it would also help if the corporate culture encouraged compromises, rather than implicitly pushing employees to battle it out, so one wins (competing) while the other loses (accommodating). Naturally, overwhelming stress and not having enough time to discuss what is, in retrospect, a less important issue (compared to other conflicts and problems) would then point to the benefits of using the avoiding mode. After having co-developed the TKI in the mid-1970s, most of my subsequent research and consulting work focused on the union of conflict management and change management. I discovered the paradox that at least 80% of what drives behavior in organizations is based on the surrounding systems (culture, strategies, structures, roles, procedures, processes, and reward systems), while only 20% is based on the person himself (personality traits, beliefs, attitudes, values, preferences, and skills).

As a result of my change management experiences, I next had to resolve the “systems/person paradox” that developed from my regularly training employees in off-site workshops to improve their conflict-handling skills while, at the same time, their workplace behavior was primarily determined by their boss’s expectations, cultural norms (in which peer-group pressure influences employees to address their conflicts in a particular manner), and the reward system (which signals which conflict modes are preferred over others in terms of who gets promoted or who gets fired). Said differently: Unless the organization’s systems explicitly encourage members to make good use of their recently acquired knowledge and skills, what is learned in a workshop will never find its way into the workplace. In fact, failing to address this “transfer-of-learning” problem—which always emerges as people move across systems—wastes millions of corporate training dollars every year!

Here’s how I resolved this challenging paradox: In the short run, aside from reviewing their TKI results in an off-site workshop, employees also must learn how to read the situation and then choose which conflict mode will most likely lead to the best outcome. In the short term, the situation, for all practical purposes, is fixed and employees must therefore adapt to it. But in the long term, the situation can be changed through planned efforts to develop more trust, clarify the importance of issues according to an up-to-date understanding of strategic goals, and improve the culture and the reward system to inspire people to use the collaborating mode for the most important and complex issues facing the organization. Of utmost importance: Employees must use the right combination of the five conflict modes in order to resolve their vastly different views about how their surrounding systems should first be self-designed and then self-managed!

If this expanded systems/person perspective on conflict management can be built into the fabric of an organization, people’s behavior and results would no longer be dominated by the overpowering 80% that usually seems far out of reach and, therefore, so intractable. Rather, by using the TKI along with a good understanding of systems, people will be more empowered—and capable—to manage their systemwide conflicts for the benefit of all internal and external stakeholders.

Ralph Kilmann is CEO and Senior Consultant of Kilmann Diagnostics, an e-learning business that provides online courses and assessment tools for conflict management and change management. He received his Bachelors and Masters in Industrial Administration from Carnegie Mellon University, and a Ph.D. in Behavioral Sciences for Management from the University of California, Los Angeles.